Alan Cringean (of AC Guitars) has teamed up with John East from East UK to produce a filter based pre-amp.

This new pre-amp is available in several different configurations. This includes a single pickup version, two Jazz plate versions and 3/4/5 knob versions. The Jazz plate version will fit into a standard Jazz Bass control cavity including the battery. Same easy installation as other East Preamps with all connections made using screw terminals so no soldering required.

If you are used to the normal cut and boost type of EQ using the ACG pre-amp will require a different approach in order to get the most from it.

First a few notes on the principals behind the design and then a few suggestions on how to get the best from it.

VOLUME/BLEND STACK
The volume of the instrument is controlled by the upper ring on the stack while the lower ring controls the mixing of the outputs from the two pickups. Turn ACW for the bridge pickup alone and CW for the neck pickup. Intermediate settings allow a mix of the two pickups. The indented centre click gives an equal mix. In several configurations the volume and blend are on individual pots.

The main element in the pre-amp is the filter stacks.

BASS FILTER STACK
First, a filter lets some parts of the frequency spectrum through and not others. The type of filter determines which part it lets through. Also, the amount of cut-off is important. If it has a sharp or steep cut-off, it is more dramatic.

There is a LOW PASS FILTER where the frequency is variable over quite a broad range; from just allowing the very deepest sounds through, to allowing upper midrange frequencies of 3kHz. As the frequency control is adjusted, sound ranges from very deep to a much more open sound, taking in more midrange as the control is increased. As it's a low pass filter, the very low bass is always there, but the high frequencies can be progressively opened up.

This aspect of the pre-amp is controlled by the lower ring on the filter stack. Fully ACW giving you a very full deep bass sound. As the knob is turned CW, more of the higher frequencies are let through the filter.

The upper ring on the filter stack sets the peak level. Fully CW is maximum gain (boost) and when turned ACW the gain is reduced.

PASSIVE TONE
In the 4 knob J plate version and the 5 knob version there is the addition of a passive tone control. The dual passive tone pot and two capacitors are connected directly to the pickups in order to create a passive roll-off via direct interaction with with the pickups.

INTERNAL CONTROLS
The pre-amp also has some internal control options. There is a separate gain control for each pickup input. The main use for this control is to allow you to use two different types of pickup but still have a balanced volume from them both.

This would also allow you to use say a Musicman style pickup with a Jazz style pickup and still be able to balance their respective volumes. 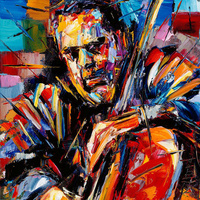