Empress Compressor
Made in Canada

Compression is a tool used on pretty much every recording you will ever hear, yet this extremely useful and versatile tool is often overlooked by guitar players as part of their rig.

Other compressor pedals are often limited by oversimplified controls and heavily colored sounds. We have created a truly transparent compressor, complete with all the controls found in the studio. The result is a tool that allows for a wide range of sounds from subtly adding sustain to getting the “quack” that country players love.

We’ve also included a mix knob to blend in the dry signal for an even more transparent sound and a gain reduction meter so you know what the compressor is doing at all times.
From: Empress Effects

"Empress: Truly this is a golden age of pedal compressors. Makers have started to realize that they cannot keep re-hashing the same old circuits, and that consumers really do want "studio rack unit" quality of processing in a pedal format. The latest of this new generation to come my way is the Empress.

The most prominent feature is a large row of LED's for metering. Not only is this easier to see and read than most other pedal LED meters, it has three settings to display either input levels, or amount of gain reduction, or both simultaneously. Having such clear metering is a major benefit to anyone needing help figuring out how much their signal is being compressed, and understanding the attack and release times.

The controls include knobs for input and output levels, attack and release times, "mix", and a toggle switch to select between three ratios. The input knob controls the threshold, where the compression kicks in. The mix knob allows you to blend your dry, uncompressed signal in with the compressed signal--see my FAQ article about parallel compression for more on that subject. The ratios available are 2:1, 4:1, and 10:1. The 10:1 ratio works well as a limiter for moderate peaks; it won't stop very strong spikes unless you set the threshold quite low, squashing your whole signal more. The attack and release controls have a nice wide range.

There is no loss of highs or lows (technically it's about 3 dB down at 30 Hz), but under compression the lows can get restrained enough to seem rolled off. You could describe all that as "tightening up" the lows. You can bring back the perception of big lows by carefully adjusting the input level, attack time, and blend. There is almost no noise, at most settings. The tone is clean enough to satisfy people who want transparency, yet warm enough to satisfy people who want to avoid "clinical sterility". Tonally it reminds me of the Diamond comp. The action is smooth and natural; it will not do squashy "dip and swell" effects.

It also features a sidechain loop jack, in which you can insert an external EQ or other processor, to change the response of the compression circuit. For example if your instrument's boomy lows are causing the compressor to squash too much, but you don't want to cut the lows, you can use an EQ to adjust the lows in the sidechain--this will keep the compressor from overreacting, without actually cutting any lows from your audio signal. For another example you could control the compression using a kick drum track, for a popular techno effect. To use the sidechain you'll need an "insert" cable, a Y cable that goes from a TRS (stereo) plug to two mono plugs.

It runs on standard Boss-type 9V DC, or you can use up to 18V DC for higher headroom (less chance of unwanted clipping). The construction quality is very good, and the housing is the same medium size as Diamond, Barber, FEA pedals. The footswitch is "true bypass".

Between the Empress and the MXR M87, the MXR is smaller, but the Empress is a little bit better in every other way: tone, build quality, noise, versatility, even the metering! Don't get me wrong, the MXR is great and I do recommend it; but if size is not too much of a concern for you, I recommend the Empress more highly. Between the Empress and the various FEA models, they are equals in quality, versatility, and tone. The Empress has better metering, but there are several tonal and functional qualities of the FEA product line that give them their own edge--so bottom line, it comes down to personal taste preferences. The Empress has earned a spot among the pedal royalty!" From: "Compressor Reviews"

"Between the Empress and the MXR M87, the MXR is smaller, but the Empress is a little bit better in every other way: tone, build quality, noise, versatility, even the metering!" 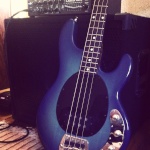