I like the idea of portability. Carrying stuff across a parking lot and up stairs was getting to my rotator cuff. Markbass stuff might help. It sounds great, is light and portable, but too expensive.

I read the whole thread about Micro and Nano Rigs. My shoulder needs that I get a portable micro rig, so I decided to make a portable coffeeshop rig myself.

I need a working amp that I can rely on, so I decided to get another amp for modification project. That way, and if I blow up the project amp, I can keep practicing with my current amp.

Starting with a complete working unit will give me one that looks good after I finish, rather that some hack job that sounds good, but looks bad. Been there, done that.

At $99, the Ampeg BA 108 is cheap enough to make it a project. Lightly used units can be found on Ebay, Craigslist. I got mine for $69 in the used amp section of Guitar Center.

The TB-110 project is pretty cool. It uses the Eminence S2010 10 inch speaker. The BA-108 has about the same volume as the Goldwod box minus the shelf, so this project will use the same speaker.

The S2010 is a significant upgrade to the BA 108. 2 inches larger in diameter than the stock BA 108 speaker, but just about doubles the cone area. So it can push more air.
The voice coil grows from 1" to 2" for power handling.
The neo magnet helps keep the weight down. Win

I have read many internet builds in the past, but this is my first. I hope that this helps someone out there.

Notice that the new speaker is very close to the port. So the strategy is to plug the port, and go to a rear port

The Ampeg BA-108 is under rated. This project upgrades the amp to greater potential.

Phases 1A and 1B are geared to increasing SPL.

Phase 1C brings clarity to the preamp. Phase 1C actualy starts phase 2 - the electrical portion of the project. The reason that it is part of phase 1 is that it goes along with parts A and B as a straightforward upgrade.

Phase 1C removes the ancient TL072 opamp with something designed this century. An opamp socket is installed so that I can evaluate different opamps.

Right now, I'm running a Burr-Brown OPA2132. It sounds great. I chose the Burr-Brown OPA2132 because one reviewer said that it was tube like. Just what you need in a musical instrument amplifier. I like it so far. It is noticably better than the TL072.

Sometimes, the clarity startles me. I surprises me how I can have that tone under my fingertips...But then it also amplifies my mistakes as well.

For right now, I'm working on getting more output power for the amp. I will try other op-amps later


Thanks for the backup. I knew that there was another hardware hacker out there somewhere. I have gotten similar results - much deeper and much louder. I have a lot more geeky measuurements that I want to do, but right now, I'm field testing!

In testing at home, I have turned it up to 8. No farting, but I did begin to hear distortion.

I jammed with my Jazz group a couple of weeks ago at practice. Drummer, sax, trumpet, trombone, guitar, percussion. I had a blast.

The Ampeg BA108 puts out 35 watts.
The Precision Port is advertised to give a 3 dB gain.
The Eminence speaker was measured to give a 2.5 dB gain over the BA110 speaker.
Pretty good SPL for this project. 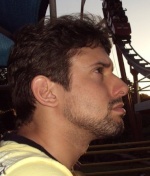