Craig Anderton may be Executive Vice President at Gibson, but he still gets juiced up about cool tools -- whatever his business ties.

This one is admittedly a Gibson product—in association with Tascam—but Craig was pretty jazzed to share the concept with Guitar Player recently: An instrument cable with an onboard digital recorder that can record everything you create at a rehearsal, songwriting session, gig, and/or riffing around at home.

In fact, you don't even need to plug the cable into an amp. As soon as it is plugged into your instrument, you're capturing your ideas. Plug it into the output of your P.A. system, and you can record your whole band. Play something you want to later copy into a recording session? No problem—just re-amp your idea and drop it into your mix. The WAV file format is compatible with Mac, Windows, iOS and Android.

The Gibson Brands Memory Cable will be available at Gibson.com and your local retailer for $99 retail in early April. 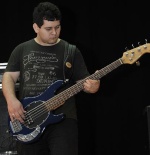