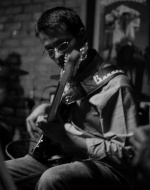 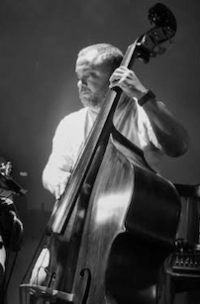 "A Shade of Blue"
https://www.youtube.com/watch?v=lVbGheLspwI&fmt=18

Slave - Just a Touch of Love

Like the term "swing", which is used to describe a cohesive rhythmic "feel" in a jazz context, the concept of "groove" can be hard to define. Indeed, some dictionaries use the terms as synonyms: "Groovy...[d]enotes music that really swings."[2] Marc Sabatella's article Establishing The Groove argues that "groove is a completely subjective thing." He claims that "one person may think a given drummer has a great feel, while another person may think the same drummer sounds too stiff, and another may think he is too loose."[3] Similarly, a bass educator states that while "groove is an elusive thing" it can be defined as "what makes the music breathe" and the "sense of motion in the context of a song."[4]

In a musical context, general dictionaries define a groove as "a pronounced, enjoyable rhythm" or the act of "creat[ing], danc[ing] to, or enjoy[ing] rhythmic music."[5][6] Steve Van Telejuice explains the "groove" as the point in this sense when he defines it as a point in a song or performance when "even the people who can't dance wanna feel like dancing..." due to the effect of the music.

Bernard Coquelet argues that the "groove is the way an experienced musician will play a rhythm compared with the way it is written (or would be written)" by playing slightly "before or after the beat." Coquelet claims that the "notion of groove actually has to do with aesthetics and style"; "groove is an artistic element, that is to say human,...and "it will evolve depending on the harmonic context, the place in the song, the sound of the musician's instrument, and, in interaction with the groove of the other musicians", which he calls "collective" groove."[7] Minute rhythmic variations by the rhythm section members such as the bass player can dramatically change the feel as a band plays a song, even for a simple singer-songwriter groove.[8]

UK musicologist Richard Middleton (1999) notes that while "the concept of groove" has "long [been] familiar in musicians' own usage", musicologists and theorists have only more recently begun to analyze this concept.[9] Middleton states that a groove "... marks an understanding of rhythmic patterning that underlies its role in producing the characteristic rhythmic 'feel' of a piece." He notes that the "feel created by a repeating framework" is also modified with variations.[9] "Groove", in terms of pattern-sequencing, is also known as "shuffle note" - where there is deviation from exact step positions.

When the musical slang phrase "Being in the groove" is applied to a group of improvisers, this has been called "an advanced level of development for any improvisational music group" which is "equivalent to Bohm and Jaworski's descriptions of an evoked field", which systems dynamics scholars claim are "forces of unseen connection that directly influence our experience and behaviour.[10] Peter Forrester and John Bailey argue that the "chances of achieving this higher level of playing" (i.e., attain a "groove") is improved when the musicians are "open to other's musical ideas", "complemen[t] other participant’s musical ideas", and "taking risks with the music".[10]

Turry and Aigen cite Feld's definition of groove as "an intuitive sense of style as process, a perception of a cycle in motion, a form or organizing pattern being revealed, a recurrent clustering of elements through time." Aigen states that "when [a]groove is established among players, the musical whole becomes greater than the sum of its parts, enabling a person […] to experience something beyond himself which he[/she] cannot create alone (Aigen 2002, p.34)."[11]

Jeff Pressing's 2002 article claimed that a "groove or feel" is "a cognitive temporal phenomenon emerging from one or more carefully aligned concurrent rhythmic patterns, characterized by...perception of recurring pulses, and subdivision of structure in such pulses,...perception of a cycle of time, of length 2 or more pulses, enabling identification of cycle locations, and...effectiveness of engaging synchronizing body responses (e.g. dance, foot-tapping)".[12]

Use in different genres
R&B
The "groove" is also associated with funk performers, such as James Brown's drummers Clyde Stubblefield and Jabo Starks, and with soul music. "In the 1950s, when 'funk' and 'funky' were used increasingly as adjectives in the context of soul music—the meaning being transformed from the original one of a pungent odor to a re-defined meaning of a strong, distinctive groove." As "[t]he soul dance music of its day, the basic idea of funk was to create as intense a groove as possible."[13] When a drummer plays a groove that "is very solid and with a great feel...", this is referred to informally as being "in the pocket"; when a drummer "maintains this feel for an extended period of time, never wavering, this is often referred to as a deep pocket."[14]

Hip hop
A concept similar to "groove" or "swing" is also used in other African-American genres such as hip hop. The rhythmic groove that jazz artists call a sense of “swing” is sometimes referred to as having "flow" in the hip hop scene. "Flow is as elemental to hip hop as the concept of swing is to jazz". Just as the jazz concept of "swing" involves performers deliberately playing behind or ahead of the beat, the hip-hop concept of flow is about "funking with one's expectations of time"-that is, the rhythm and pulse of the music.[15] "Flow is not about what is being said so much as how one is saying it".[16]

Jazz
In some more traditional styles of jazz, the musicians often use the word "swing" to describe the sense of rhythmic cohesion of a skilled group. However, since the 1950s, musicians from the organ trio and latin jazz subgenres have also used the term "groove". Jazz flute player Herbie Mann talks a lot about "the groove." In the 1950s, Mann "locked into a Brazilian groove in the early '60s, then moved into a funky, soulful groove in the late '60s and early '70s. By the mid-'70s he was making hit disco records, still cooking in a rhythmic groove." He describes his approach to finding the groove as follows: "All you have to do is find the waves that are comfortable to float on top of." Mann argues that the "epitome of a groove record" is "Memphis Underground or Push Push", because the "rhythm section [is] locked all in one perception." [17]

Reggae
In Jamaican reggae, dancehall, and dub music, the creole term "riddim" is used to describe the rhythm patterns created by the drum pattern or a prominent bassline. In other musical contexts a "riddim" would be called a "groove" or beat. One of the widely-copied "riddims", Real Rock, was recorded in 1967 by Sound Dimension. "It was built around a single, emphatic bass note followed by a rapid succession of lighter notes. The pattern repeated over and over hypnotically. The sound was so powerful that it gave birth to an entire style of reggae meant for slow dancing called rub a dub."[18]

Groove metal
In the 1990s the term "groove" was also used to describe elements of a form of thrash metal called groove metal which is based around the use of mid-tempo thrash riffs and detuned power chords played with heavy syncopation. "Speed wasn’t the main point anymore, it was what Pantera singer Phil Anselmo called the 'power groove.' Riffs became unusually heavy without the need of growling or the extremely low-tuned and distorted guitars of death metal, rhythms depended more on a heavy groove."[19] Groove metal drums typically use double-bass drumming, with emphasis on using the double bass drum in waves, rather than rapid fire double bass and blast beats used in extreme metal styles.[citation needed] Uncommon time signatures and polyrhythms are typical for some bands, and generally these bands put heavy emphasis on the changing beat. 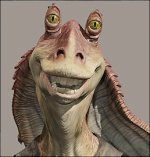 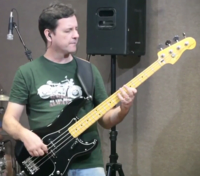 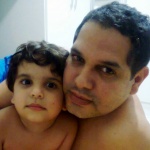